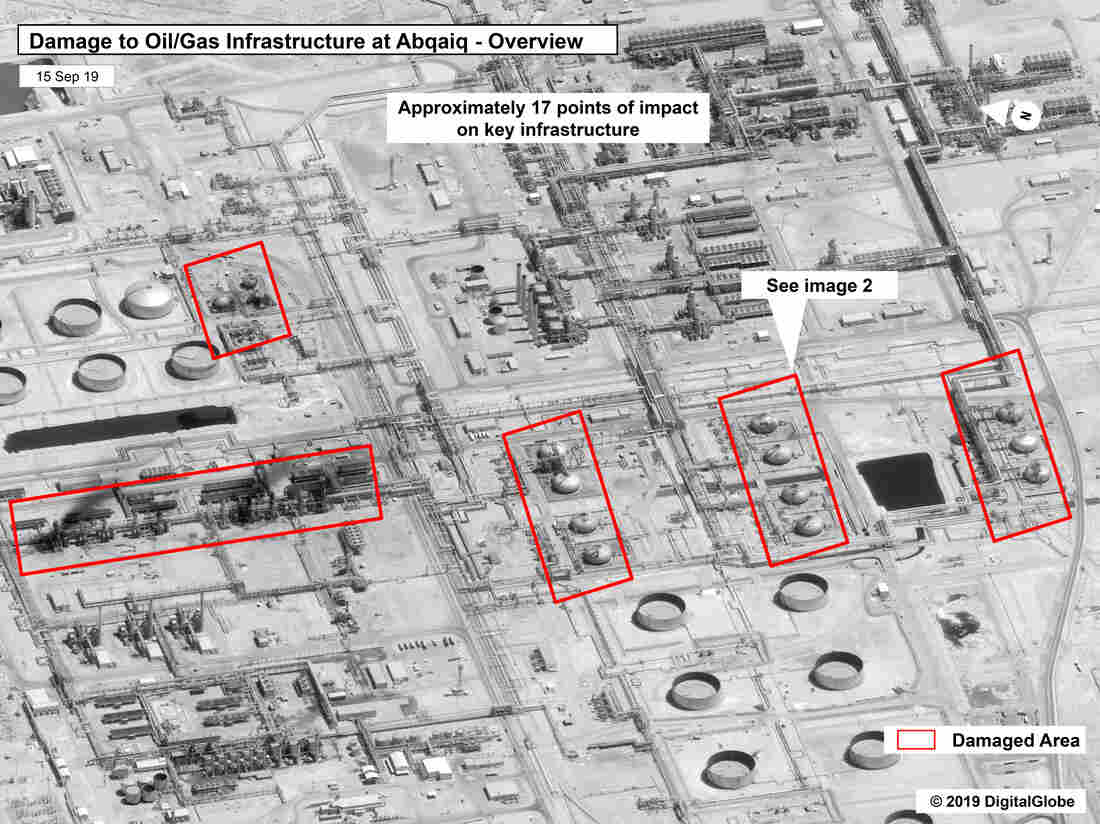 Defense Department officials say U.S. satellites detected Iran readying drones and missiles at launch sites prior to the attack on a Saudi oil facility on Saturday. Here, an image provided by the U.S. government and DigitalGlobe (and annotated by the source) shows damage to the infrastructure at Saudi Aramco's Abqaiq oil-processing facility. AP hide caption 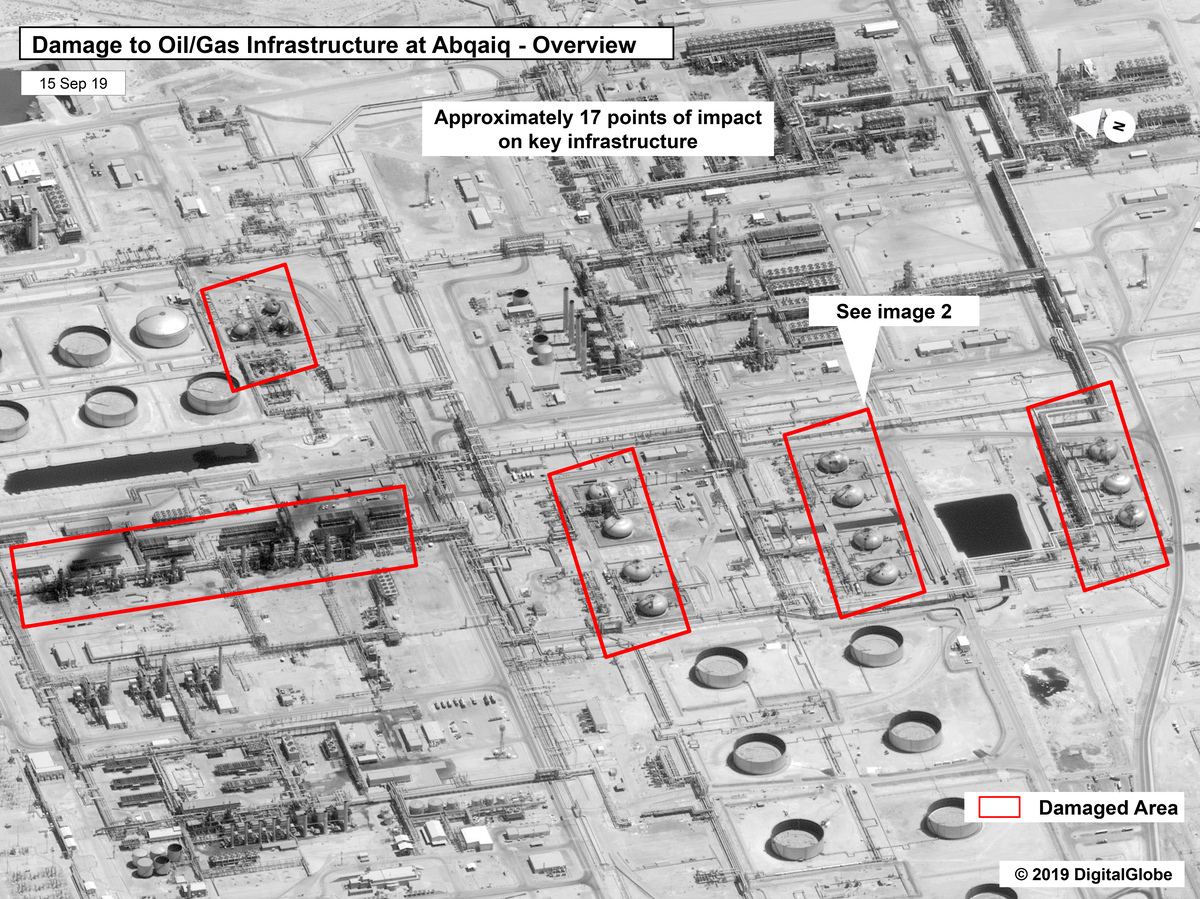 Defense Department officials say U.S. satellites detected Iran readying drones and missiles at launch sites prior to the attack on a Saudi oil facility on Saturday. Here, an image provided by the U.S. government and DigitalGlobe (and annotated by the source) shows damage to the infrastructure at Saudi Aramco's Abqaiq oil-processing facility.

The imagery has not been publicly released. The officials tell NPR that U.S. intelligence views the activity as "circumstantial evidence" that Iran launched the strike from its own soil.

Saudi Aramco has said the attacks on its plants in Abqaiq and Khurais were "a result of terrorist attacks with projectiles." Iranian-backed Houthi rebels in Yemen claimed responsibility for the attack, but U.S. officials have accused Iran of playing a key role.

Iran has denied any involvement.

The two officials say the U.S. Defense Department has sent a forensic team to Saudi Arabia to examine wreckage of drones and missiles used in the attack. Intelligence experts say the outcome of those examinations could provide "compelling and convincing" evidence that Iran was behind the attack.

The strike knocked out more than half of Saudi Arabia's oil-exporting capability, rocked financial markets and prompted a spike in crude oil prices.

Amid the finger-pointing over who carried out the attack, Iranian Supreme Leader Ali Khamenei said Iran "will hold no talks at any level with the U.S.," blaming the Trump administration for requiring too many conditions.

U.S.-Iran talks had been mentioned as a possibility during the upcoming U.N. General Assembly in New York.

The U.S. administration has pursued a campaign of "maximum pressure" against Iran to force it to abandon its nuclear program and make other changes. According to the official Islamic Republic News Agency, Khamenei says it's vital for Iran to prove that this strategy "has absolutely no value."

If the current U.S. campaign succeeds, Khamenei says, Iran could then expect to face more "maximum pressure" policies from the international community. 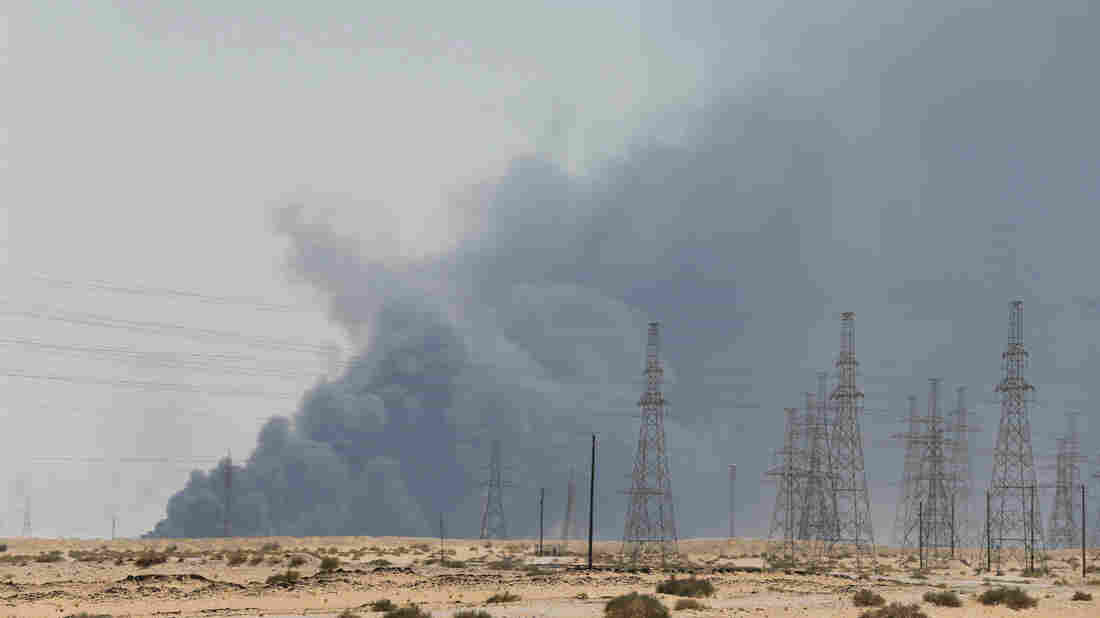 Smoke was seen billowing from an Aramco facility in Abqaiq, Saudi Arabia, after it came under attack on Saturday. Hamad I Mohammed/Reuters hide caption 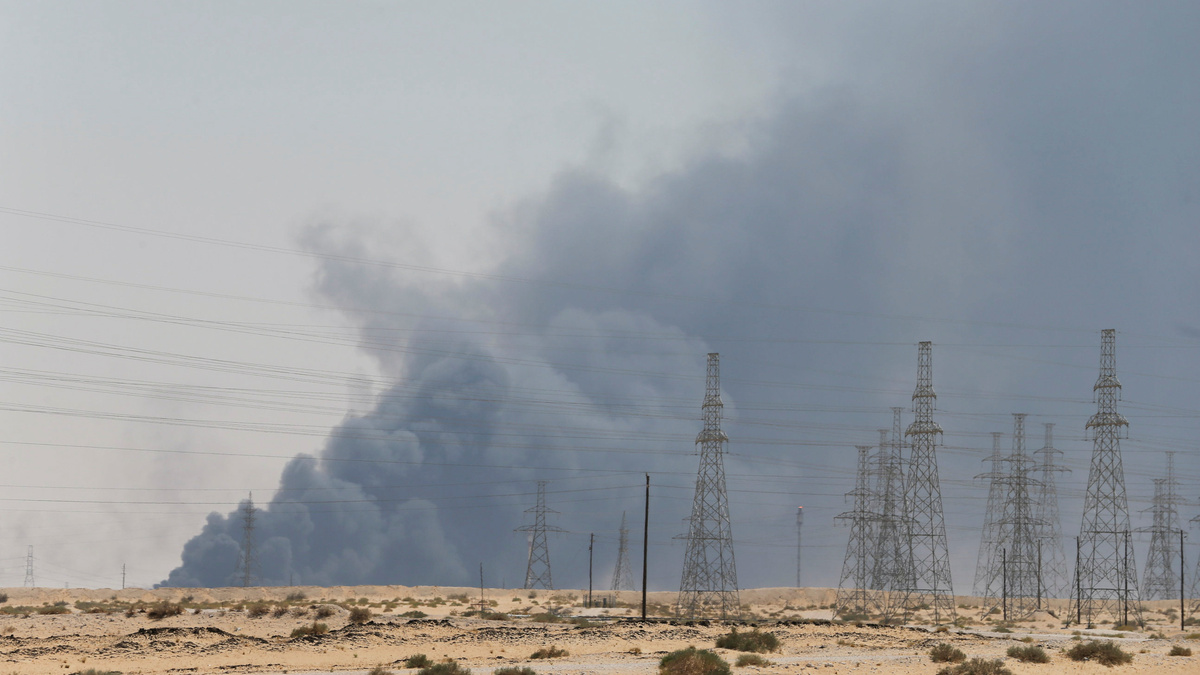 Smoke was seen billowing from an Aramco facility in Abqaiq, Saudi Arabia, after it came under attack on Saturday.

Even after President Trump took a threatening tone toward Iran over the attack in Saudi Arabia, his advisers said over the weekend that a meeting between Trump and Iranian President Hassan Rouhani was still possible. Khamenei has now ruled that out, saying Iran will speak to the Americans only if the U.S. "backs off and repents and implements the nuclear deal from which they have withdrawn."

Speaking with reporters during a trip to California, Trump was asked about the possibility of a meeting with Rouhani next week.

"I never rule anything out, but I prefer not meeting him," the president replied Tuesday.

The attack has also created a pressure-packed situation in the Middle East, where a proxy war in Yemen between Iran and its Saudi rival now threatens to escalate into a regional conflict.

Seeking to portray the conflict in Yemen in terms of human costs rather than as a contest between two bitter rivals, Iranian Foreign Minister Javad Zarif criticized the U.S. on Tuesday for speaking out forcefully when the oil supply was threatened but not when civilians were killed in airstrikes by the Saudi-led coalition.

The new tensions have prompted critiques from regional analysts who say the Trump administration's policy of pulling out of the international nuclear deal and isolating Iran has backed that country into a corner.

"The Iranians have less and less to lose and take more and more risks, which is equally true of the Houthis," as Ali Vaez of the International Crisis Group told the French website Le Point.

The Origins Of The Shiite-Sunni Split

There is now an "urgent need to de-escalate tensions in the Persian Gulf," says Barbara Slavin, the director of the Future of Iran Initiative at the Atlantic Council.

On Sunday, Trump said the U.S. was "locked and loaded" to respond, pending verification of who was responsible for the attack. But he added that he would wait to hear from Saudi Arabia about how the kingdom wants to proceed.

On Monday, the president said that while the U.S. is ready for war, he wants to avoid it.

"We have the best fighter jets, the best rockets, the best missiles, the best equipment," Trump said, when asked if he wants a war with Iran. "But with all of that being said, we'd certainly like to avoid it."

On the same day, Saudi officials said that they believe the weapons used in the attack were made in Iran — and that they were working to determine where the weapons had been launched from.

U.S. Secretary of State Mike Pompeo, who pointedly accused Iran of launching the attack in Saudi Arabia, is heading to visit the kingdom this week, along with other U.S. officials.

The attacks have forced Saudi Arabia to cut its production of crude oil by 5.7 million barrels per day — and to consider delaying a plan to sell stock in state-owned oil giant Saudi Aramco in what's anticipated to be the largest initial public offering in history.

While only a small percentage of the company is expected to be sold, Aramco is currently valued at anywhere from $1.5 trillion to $2 trillion. The international offering has been expected to happen in 2020.